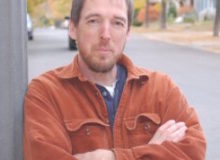 Imagery is the descriptive language used in a poem. As in, the words and phrases that create an image, or as some would say “paint a picture.” It helps us imagine the things, actions, and ideas within the poem. But don’t be fooled. Imagery does more than create a “visual” picture. It is any descriptive language that sparks our senses. For example: from “After Apple-Picking” by Robert Frost.

Sight
And there’s a barrel that I didn’t fill
Beside it, and there may be two or three
Apples I didn’t pick upon some bough.
Smell
Essence of winter sleep is on the night,
The scent of apples: I am drowsing off.

Touch
My instep arch not only keeps the ache,
It keeps the pressure of a ladder-round.
I feel the ladder sway as the boughs bend.

Hearing
And I keep hearing from the cellar bin
The rumbling sound
Of load on load of apples coming in.

Taste (at least we get the sense of taste from the mention of cider)
No matter if not bruised or spiked with stubble,
Went surely to the cider-apple heap

The imagery in this poem shows us what the poet sees: two or three / Apples I didn’t pick upon some bough, and feels: I feel the ladder sway as the boughs bend. The poem is filled with descriptive language that tickles our senses. And through imagery, the poet creates an elaborate scene of what it’s like after an apple harvest. A scene that we, as readers, can step into with our imaginations.

Two common and fun ways to use imagery in poetry are through similes and metaphors. So for lesson #3, I will discuss these poetic devices.

Similes are direct comparisons between two things. You can pick them out by finding the words as or like. For example:

The girl was strong as an ox.

In both examples, it’s easy to imagine what is meant by the comparisons. The girl is very strong girl, and the boy is sound asleep. Similes help create a clear idea of what something is like by comparing it to something similar. Take the following lines, for example. They use similes to ask what happens to a dream, such as learning to write poetry, that is not pursued.

Does it dry up
like a raisin in the sun?
Or fester like a sore—
And then run?
Does it stink like rotten meat?
Or crust and sugar over—
like a syrupy sweet?
From “What Happens to A Dream Deferred” by Langston Hughes

Pick out the similes in these lines. What sort of images do they create? What does each say about a deferred, or postponed, dream?

Metaphors also show a similarity between two things. But that comparison is less clear, or direct as they refer to two very different things. For example:

Ben and Pam are two peas in a pod.

Ben and Pam are not peas; they’re people. But peas in a peapod are alike in many ways, so that is what this metaphor is saying about them. That Ben and Pam share a similar trait to peas in a pod by also being very alike.

White sheep, white sheep,
On a blue hill,
When the wind stops,
You all stand still.
From “Clouds” by Christina Georgina Rossetti

The title of the poem gives it away, but what are the “white sheep” a metaphor for? In what ways are sheep and clouds alike? Then what does the metaphor “blue hill” describe?

A list poem is simply a list. It could be a list of things you see, ingredients for a cookie recipe, or your favorite ice cream flavors, such as in the poem “Bleezer’s Ice Cream” by Jack Prelutsky. The possibilities are limitless, but for this exercise, let’s focus on creating list poems using similes and metaphors.

Take an object. Almost any thing will do—for a poetry writing class I once taught, I liked to use a pineapple. Then, focusing on that object, write five similes, one for each of the five senses. To do this, ask yourself these questions: What does it look like? Feel like? Smell like? Sound like? Taste like? For example:

Next, try a list poem with metaphors. Go for a walk or step out into your backyard. List all of the things that spark your senses. Only, use metaphors, describing what you see by referring to something else. For example:

metaphor—a word or phrase used to describe one thing by referring to something else; for example: it is raining cats and dogs, to describe large drops of rain

simile—a comparison of two similar things that uses the words like or as; for example: the shoe was light as a feather, to describe a shoe that weighs very little

Blake Hoena is a published poet and children’s book author living in St Paul, MN. To learn more about him and his writing, go to bahoena.com. And should you write any poems using the recommended writing exercise, forward them to him so he can post them on his blog.